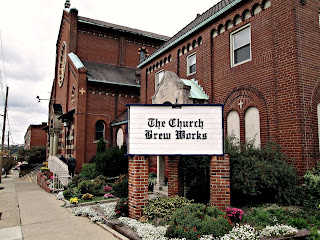 In a book attributed to Donald Wuerl and Mike Aquilina, the following is stated:

"Love Is the Builder

Catholics love their churches.  We build them with love.  We make them
lovable.   ...

...   Catholics build their churches with love; and our love has a language
all its own.  Like romance, Christian devotion follows certain customs and
conventions—a tradition poetic and courtly—hallowed by millennia of ex-
perience.   ...

...   Every part of a church is rich in meaning and mystery, theology and
history.  Every furnishing or ornament reveals some important detail of
the story of our salvation.  Through two millennia, Christians have pre-
served and developed a tradition of building and decoration."

Firstly, this sounds gay.  Secondly, you aren't to love things.  You were created
to love living beings.  Churches are built out of a sense of memorial honor and
detachment from the world.  The irony is that you should also be detached from
the church building, itself.  You should own things and not have things own you.

Any church is merely a vehicle to the Eternal God, and not a goal in itself.  Fur-
thermore, Masses have been held in wartime fields, classrooms, converted barns,
etc.   I even attended Mass in a college ping-pong room.  So, any church building
in itself isn't the conveyor of grace.  It's a large sacramental, as well as a house of
prayer and a venue of devotion.  Whatever love in instilled within you while in a
church is to leave with you.  It's not confined to the church building or chapel.

Churches are the attempt to bring an acre or hectare of the spiritual realm into
the physical one.  Their construction is the attempt to manifest the transcendent
God into daily life.  Such construction is based on Sacred Geometry, as well as
statics, dynamics, and structural engineering.   Magical fairy dust is not in the
church-building equation.  Thus, the Wuerl article is out of touch.

If the aforementioned text is the way Wuerl feels about churches, then why did
he reduce the number of Pittsburgh parishes from 333 to 218?  Why did he close
several dozen church buildings, over three dozen of which were actual churches?
One such church became the Church Brew Works.

In the aforementioned book, Donald 'Dignity Mass' Wuerl regards churches as
monuments of love.  However, years prior, while the same Wuerl was closing
churches by the dozen, his spokesman said that churches weren't necessary  ...
...  that a priest can conduct mass in a ping-pong room, a classroom, or some-
where similar.  Yes, it's true that you don't need Gothic arched structures, for
Masses to be conducted.  Yet, the ultimate closer of churches, namely Donald
Wuerl, later stated that churches in themselves, exactly like the ones he sold to
non-Catholic entities, are entirely indispensable, in as far as goes his definition
of love.

Donald Wuerl:  Business transactions with a secret society
attached to automatic excommunication for joining it

So, why did Wuerl co-write/dictate a chapter about churches, to the point of re-
arding them in a way different than the way in which he treated churches in the
Pittsburgh area?  Wuerl treated churches and consecrated cemetery land as no-
thing more than marketable commodities.  He sold cemetery property to the
Masons, so that they could construct their new temple.