Wuerlgate #1, 2, 3, & 4 on the three most frequented American search engines, pursuant to the most common Wuerl-related keywords.

A cursory use of brain cells would be sufficient here.  In as much,
we begin with this site's Internet rankings as of  March 26, 2017

Now, the Vatican ignored, as far as I knew, all of the complaints against Don-
ald Wuerl that were sent to it and to the U.S.papal nuncio.  However, the same
Vatican acted as if there never were any complaints leveled against the Donald
Wuerl, in the first place.  None the less, Wuerl spent ten years in Rome, devel-
oping himself into the stereotypical good ole boy.  Thus, this is a cleric who
attained to the state of cronyism which he enjoys during the era of Vatileaks
corruption.

The Axiom of the Vatileaks Church

It's common logic that anyone in any high seat of power during any era of cor-
ruption is as corrupt as the system that elevated him.   This includes Donald
Wuerl.   None the less, due to the Internet, the Vatican cannot feign ... cannot
pretend ... ignorance of any cleric's line-itemized wrongdoing.  This is be-
cause Wuerlgate is #1 on Bing.com, as well as #2, 3, and 4 on the other
two major American search engines.

Below is a series of snapshots of major search engine results.  They are the
results of common Wuerl-related keyword searches.  Therefore, the people
in power within the Protestantized and Sodomized Vatican II Church can
easily see the existence of the Wuerlgate site which conveys the corruption
of Cardinal Donald Wuerl.  The Vatican has NO excuse for its deliberate
negligence. 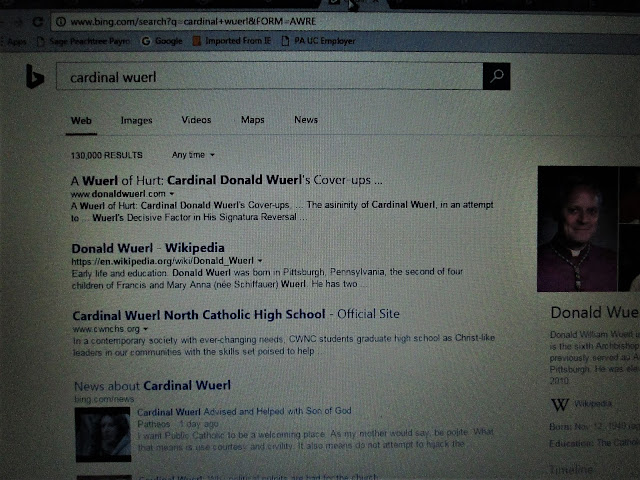 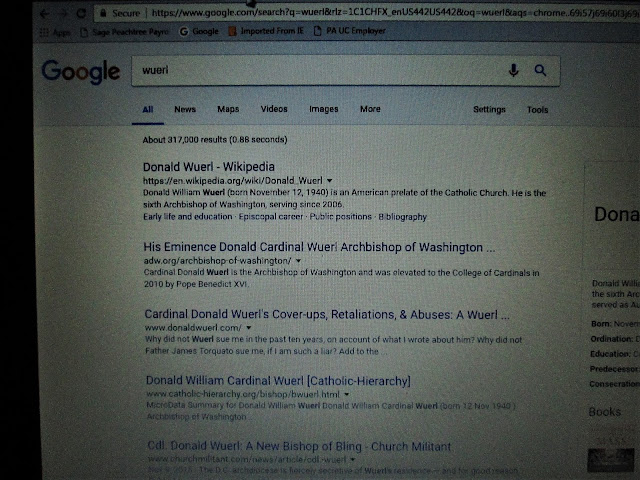 Wuerlgate, as you can now see, is in plain sight, despite the furious attempt
of the  soon-to-be-defendant,  Diane Thompson-Mangum-Labiaux who is
known for damning allegations of a very mythological arrest of Anthony
Cipolla and an even more mythological tale of retaliation after the mytho-
logical arrest.

For those unaware, this Diane Thompson-Mangum-Labiaux spread many
defamatory rumors about me,   all of which were instantly shot down as
soon as they were discovered to have been posted on the internet.  Well,
in 2016, Thompson-Mangum-Labiaux, Randy Engel, and the New Jersey
Conspiracy Theory Housewife whom I do not name for legal purposes
attempted a decapitation of me.  Engel, in her asininity, was for sure that
I was a fraud not working in the construction industry, and she failed in
her sophomoric "gotcha journalism" ambush of me.

After Engel's failure to destroy my credibility, Diane Thompson-Mangum-
Labiaux decided to decapitate me by committing million dollar libel against
me, in claiming that I was Anthony Cipolla in disguise, operating a child mo-
lester protection ring.  Now remember, I am a construction worker and pho-
tographer, as well as writer who was published a couplie times along side
national book award winnters and other laureates.  Plus, I have a very se-
vere form of allergic asthma which limits my life intensely.  This means
that I don't have the time nor the desire to operate a child molester ring.

In addition, operating such a ring requires a lot of wealth, land, and air-
borne transportation.  In as much, this allegation of Diane Thompson
was the most asinine one yet that now guarantees her total destruction.
But, the shock of this is that there were people out there stupid enough
to have believed the libel of Diane Thompson-Mangum-Labiaux.  They
did not require to see evidence.  They merely believed, because they
wanted to believe something so vile.

Now, Anthony Cipolla has been dead for over six months, and the Wuerl-
gate site has had posted on it numerous new posts since then.  Thus, it was
a site NOT operated by Anthony Cipolla.  Thus, Patrick Anthony Pontillo
is a real person whose security clearances and other facts about him were
posted online for years.

Diane Thompson-Mangum-Labiaux knew that Patrick Anthony Pontillo
existed, evidenced by the harassing emails she sent me.  Thus, she thinks
that you are stupid.  Do me a favor.  Quit being stupid.  Diane Thompson
smirks at you believers of her behind your back.

For the Vatican, there is no denying that Wuerlgate exists and that it was
NOT written by Anthony Cipolla.  For Diane Thompson's duped believers,
there is no denying that Patrick Anthony Pontillo exists, and for those people
they will definitely believe that he exists when a federal marshal serves them
with a court summons from plaintiff Patrick Anthony Pontillo.  Therefore,
you are now under notice to remove ALL defamatory web log posts writ-
ten by Diane Thompson from you own sites, web logs, and Facebook
pages.  Think, if you remain belligerent, this will mean for you no se-
cond car, no summer home, no vacation cottage, no river boat, no
vacation money for Hawaii and Vega, no expensive toys in your
life.  So, start deleting Diane Thompson libel, or eventually, your
wealth will be deleted from you. 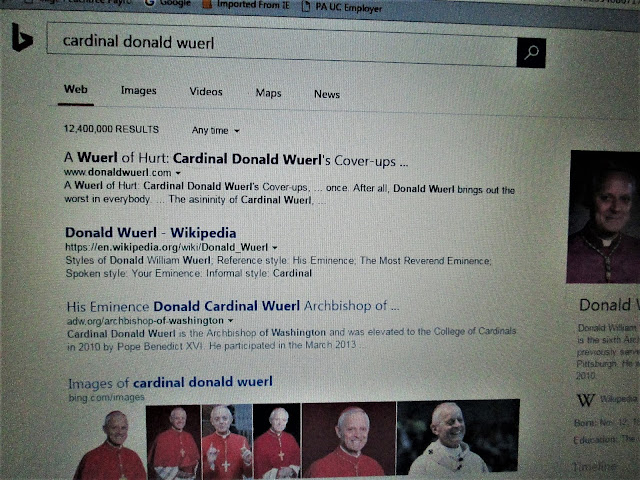