For those unaware, Diane Thompson, aka Diana Mangum, sent me an email with

a link to her latest blog post, despite the fact that I long since announced publicly
that she is the NEVER contact me directly or through people in my life or in any
other way, except via attorneys who are to send me a demand letter with a full
itemization of all editor's corrections needed to be made.

In her mid-September 2017 post, she presented that which looked to be two intro
pages of a paper deposition, done for the Tim Bendig lawsuit trial.  It was dated
February 1993, and in one of the two pages, she was identified as Diane Mangum
as opposed to Diane Thompson.

The point to mentioning her name is that, in th October 1995 Pittsburgh Post Ga-
zette article which quoted Thompson, she claimed that she was only at her second
marriage and that the guy attached to the second marriage would occasionally come
back into her life and then go.  In the 21st Century post, Thompson claimed that her
married name ... from her third marriage ... was Mangum.  Thus, she again contra-
dicts herself.

The deposition sheets posted by Thompson/Mangum were those of a stenographer-
recorded deposition, as opposed to a video taped deposition.  This is important in
that Randy Engel's three-part article of Nov/Dec 2016 stated that Diane Thompson
gave a deposition by means of video tape.  Again, we have contradictions and no
reliability of allegations made.  Diane Thompson is the opposite of a reliable wit-
ness.

Concerning those two photographed sheets of paper which were posted on Diane
Thompson's September 2017 post, if they were authentic, then the Thompson de-
position was NOT video taped as Randy Engel claimed, showing yet again no re-
liability in the Thompson/Engel allegations.

Now, the transcript which comes from a 1990s Pittsburgh area video-taped deposi-
tion looks as follows:  Below is a page of the Bendig deposition.  At the bottom of
the page, at the center is AKF.  Also at the bottom is CAT-LINKS, DISCOVERY.

"Deposition of Diane Mangum, a witness, taken on behalf of the Plaintiff, in
the above-entitled case of action, pursuant to the PA Rules of Civil Procedure,
before Kim Simms Strnisa, Shorthand Reporter and Notary Public within and
for the Commonwealth of Pennsyvania . . . on Friday, February 12

Shorthand reporter is a stenographer, and there is no reliable testimony from the
Thompson/Engel camp.
Below is a part of Bendig's deposition for his lawsuit.
Take  note of the bottom margin 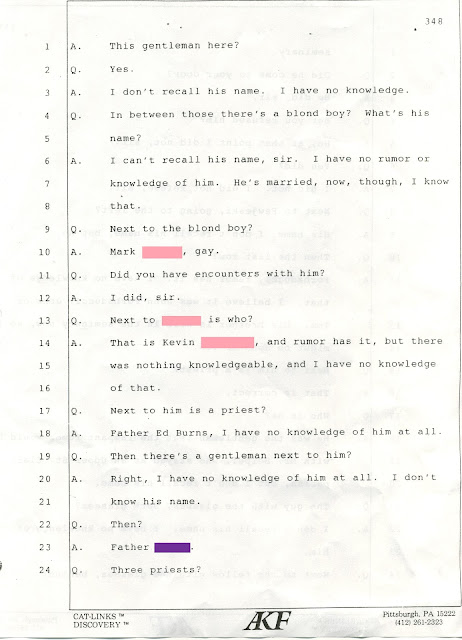 There is more to come, but for now, I need to take a break.