The Sovereign State of Pennsylvania's Original Findings on the Anthony Cipolla Investigation, in the Form of an Official Document

Once again, despite my repeated notices and despite her acknowledgement of
said notices, the provingly false accuser of the deceased man formerly known
as Father Anthony Cipolla wrote to me in gloating arrogance, proudly asking
what I had to say about a short news report from Pittsburgh area news reporter
Andy Sheehan.  He referred to Anthony Cipolla as the homosexual molester,
as if Sheehan had read the Pennsylvania Grand Jury Report... as if Sheenan
were the commissioned adjudicator of the Sovereign State of Pennsylvania.

If you are an occasional visitor to this Wuerl-of-Hurt site, then you know the
tune.  Cipolla's accuser acts beyond smug, thinking that she has me cornered
to the point where I have to drop to my knees and beg mercy from her.  No,
I'm the one who has been extending mercy to her for a heroic length of time.

However, come next week, when I have free time, I finally have to contact
the Melbourne Florida police, the county sheriff of said jurisdiction, and the
State Attorney's General office, to get initiated the process which will have
her two grandchildren's custody taken away from her, as well as finally get-
ting that court order I should have gotten three years ago, when she started
harassing and defaming me.  Of course, defamation in all forms (be it libel,
slander, or invasion-of-privacy-in-a-false-light) is a criminal offense in the
State of Florida.

Her TEN ad hominid blogs, defaming me in every imaginable way, show
signs of a psychological pathology by which she is too mentally unstable
to care after youth.

The only way which I am not going to press the Florida criminal court sys-
tem button is IF AND ONLY IF she deletes all of the blogs that defamed
me, and IF AND ONLY IF she never constructs a new one.  Things have
changed, and those who had been given advantages from the thoroughly
corrupt Vatican II church are soon to be learning how justice truly does
prevail.  Their days are finished.  They simply haven't realized it, yet.
It's only a matter of short time.

Now, in response to that woman's latest unwelcomed email to me:

What do I have to say about Andy Sheehan's report, where within he
calls the late Anthony Cipolla a child molester?

ANS:  Demand letter to Sheehan and to Sheehan's corporate employer,
followed by a libel lawsuit on behalf of the Cipolla family, including
the Vince Cipolla whom I got to know, if necessary.

Now, for those who lived a life of only sound bytes and short news
articles, as well as bumper sticker slogans, here is a newsflash for
you.  Be attentive:

The damning accusations of Tim Bendig against Anthony Cipolla have
already been investigated in two Pennsylvania jurisdictions by authorized
personnel of the Sovereign State of Pennsylvania.  The jurisdictions were
Allegheny County (home of Pittsburgh) and Beaver County (Northwest
of Pittsburgh.)

Now, the Beaver County investigation, alone, endured for THREE
months, and the findings of both Pennsylvania counties were that:

THERE WERE NO GROUNDS UPON WHICH TO FILE ANY
CRIMINAL CHARGE AGAINST ANTHONY CIPOLLA.

One copy of the OFFICIAL documentation pertaining to the findings
of the Cipolla investigation appears below.   Now, read it.  Perceive it
and know that the Pittsburgh media was complicit with Donald Wuerl's
dishonesty.  Acknowledge ... be enlightened ... be free of the propaganda.

If this is NOT mentioned in the 2018 grand jury report, then it shows the
incompetency or corruption or heavy workload of the grand jury by which
it would constitute a good-faith oversight.  After all, we are only human.
In as much, when something is omitted or newly discovered, then you
simply motion for amendment to the record.

Incidentally, a grand jury is NOT a panel of experts or specialists.  In fact,
a grand jury is chosen like a raffle drawing from a voter registration list.
Thus, the jurists don't know PA criminal procedure, etc.

Wuerl used the Cipolla Case as a diversionary tactic, to get prosecutor
John C. Pettit off his back, due to Pettit prosecuting Wolk, Zula, and
Pucci, AND due to the fact that, during the years when Wuerl was be-
ing hailed as the "loving" & protective zero tolerance hero, he was
covering up the notorious John S. Hoehl, the triply reported Edward
Huff, and the John Wellinger case which actually was a matter of Fr
Ron Lengwin's deliberate negligence.  That's six cover-ups in a short
period of time, in a Pittsburgh that's 6 times smaller in population than
is Philadelphia.

Again, view, perceive, and realize how much of a pathologist liar Wuerl is.
And when do you know Wuerl is lying?  ANS:  When he opens his mouth. 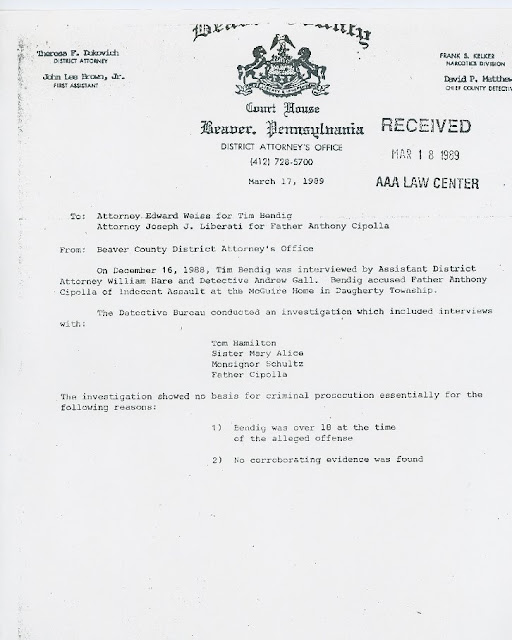