If you're familiar with the most damning accusation that a certain 70+ year
old cyber-bully peddled against me, simply skip the introduction here and
scroll down to the evidence-exhibit below. The evidence is a document
from the official office of the South Carolina Law Enforcement Division.

More specifically, it's my 2020 South Carolina Security Clearance Criminal
Background Check result sheet.   You will see prominently displayed on it,
in red ink, "NO ARREST DATA."   For those of you who were my friends,
and/or my moral support providers, and/or my confidants, and/or my allies
in the fight against modern Church corruption, the photo-document below is
your Liberation Day.

The Endless Online Lynching of Me

Perhaps you're familiar with a 70+ year old woman in Eastern Florida who
relentlessly defamed me, bullied me, belittled & mocked me, via her blogs.
If you don't remember this, it would be because I pushed the same legal but-
ton repeatedly, in order to get taken offline over a dozen of her blogs which
obsessed themselves with me alone.  Very simply, when one of her abusive
blogs would get taken offline by the powers-that-be, she would simply con-
struct a new one and get nastier.

Well, this 70+ year old woman publicly claimed in 2015 that I was the now-
late Anthony Cipolla in disguise, operating this anti-Donald Wuerl site and
simultaneously operating a child molestation protection ring.  Even though
this anti-Wuerl site spoke out against clergy sex abuse committed upon all
age groups, people were easily fooled by the 70+ cyber bully and believed
what bully lady claimed.  This resulted in me losing 92% of my viewers.
Before this, my sites would collectively get 300,000+ views per month.

Now, the man formerly known as Fr Anthony Cipolla then died in a tragic
auto accident in 2016.  After his death, this website kept getting new posts,
proving that Anthony Cipolla was not operating this site or any site, at all.
So, the defamatory bully woman continued her attacks against me, by add-
ing new defamations.

She was such a violent bully that she even posted a map to my now-former
home, along with a photo of that house, violating my privacy and the privacy
of those people who purchased the home.  She spent her days inciting hatred
toward me, to the point of even posting a map of my former home.  This could
inspire those who were incited to hate me to use that map ... for the intention
of doing me violence.  Big problem, though.  When she posted the map, I had
already been moved out of that domicile for 3 years.  The bully lady was three
years too late.  Thus, she was endangering total strangers there.


Being Mortal Enemy #1 to a Woman Caught Publicly Lying

Now, I was already well recognized as this bully woman's Mortal "Enemy #1,
and one of the things she did to her Mortal Enemy #1 (in 2017) was arrogant-
ly claim that he has had a criminal record in the State of South Carolina since
2010, for stalking.  However, in 2010, I was a severe respiratory allergy pa-
tient, living as a 21-24 hour-a-day invalid.  My ability to go anywhere was
extremely constricted & restricted, due to allergies and irritant-induced asth-
ma attacks.  Even going to Sunday Mass was out of the question.  Moreover,
the United States Social Security Administration recognized me as having
been totally disabled since September 2001, due to intense workplace chem-
ical and irritant dust exposure.   It wouldn't be until 2014 that I would start
the attempt to rise from my respiratory ashes and try to have a life.

Such a medical patient is incapable of stalking anyone anywhere, due to the
many respiratory allergens such a patient has to avoid.  And of course, stalk-
ing is the act of hunting a person, in order to assault or kill that person.  If the
hunting conduct doesn't occur, no stalking occurs.   None the less, due to this
70+ year old bully woman's persistent defamation of me, I had to post a hand-
ful of the security clearances that I received in life.  This included a notarized
testimony that I once possessed a Pennsylvania Dept of Corrections security
clearance which permitted me to do construction work on PA State prison in-
frastructures.  That notarized testimony replaced the lost documentation that
informed my company that I received the needed PA Dept of Corrections
clearance for a guard tower construction project we were assigned to do.

Despite my security clearances, this hostile woman kept assassinating my char-
acter, and she only did so, because I revealed step by step how she lied to the
public about the arrest and arraignment of a priest which never occurred.  I al-
so revealed, step by step, how false was her harrowing story of a DA harassing
her to the point of forcing her to sign a sheet of paper which "dropped criminal
charges" against the priest.  Concerning this, take note of the most important
part of her tale :::

In the United States, once a criminal indictment has been filed, no civilian any-
where can "drop charges."   A criminal case can only be dismissed in the United
States by  1} the preceding judge,  2} the prosecutor,  3} a jury's verdict of NOT
guilty, but only after the presiding judge confirms the verdict and fulfills the
rules of criminal procedure.  Furthermore, in America, a prosecutor is either
a "solicitor" or a "district attorney," depending on the state in question.

The bully woman claimed that, in 1978, a DA pressured her into signing a
sheet of paper which dropped criminal charges against the man formerly
known as Father Anthony Cipolla.  This claim, alone, assured the reader
that the bully woman was lying about 1978.  This is because no civilian
can sign a sheet of paper that dismisses a criminal case.  In fact, it turned
out that the priest was never arrested or indicted, in the first place.

None the less, she also claimed that two detectives were on the case, and she
gave their two names, along with their badge numbers.  I located and contact-
ed one of them and learned that they were only uniformed police officers who
took down her report, transposed in cursive writing on a police form, and then
gave it to the one detective assigned to the case.  So, I proved that she even
lied about that feature of her story.  She lied about everything, and I revealed
this.  This resulted in her endless harassment of me and her endless defama-
tion of my reputation.

Then, in May of 2020, during a telephone call, I was informed this stalking
horror story was transformed into a priest being stalked in 2010.  At that
point it got to the point where one says, "Okay, joke's over.  It's Turbo Time."
Enough already.   None the less, if you are filled with a sense of compassion
toward me, on account of what I suffered for years, or if you are now filled
with a sense of indignation and what to help me in future legal actions de-
signed to undo the damage to my reputation, then contact me only by cell
phone, between 7pm and 10pm.  My phone number should still be posted
on all my sites.

PS:  There is still more news to convey about Wuerl- related things which
I have been keeping secret.

In as much, ladies and gentlemen of the jury, in the Court of Public Opinion,
I present to you my Year 2020 South Carolina Security Clearance Criminal
Background Check results.  This confirms that I do NOT have a criminal re-
cord in the State of South Carolina, as a 70+ year old cyber bully claimed: 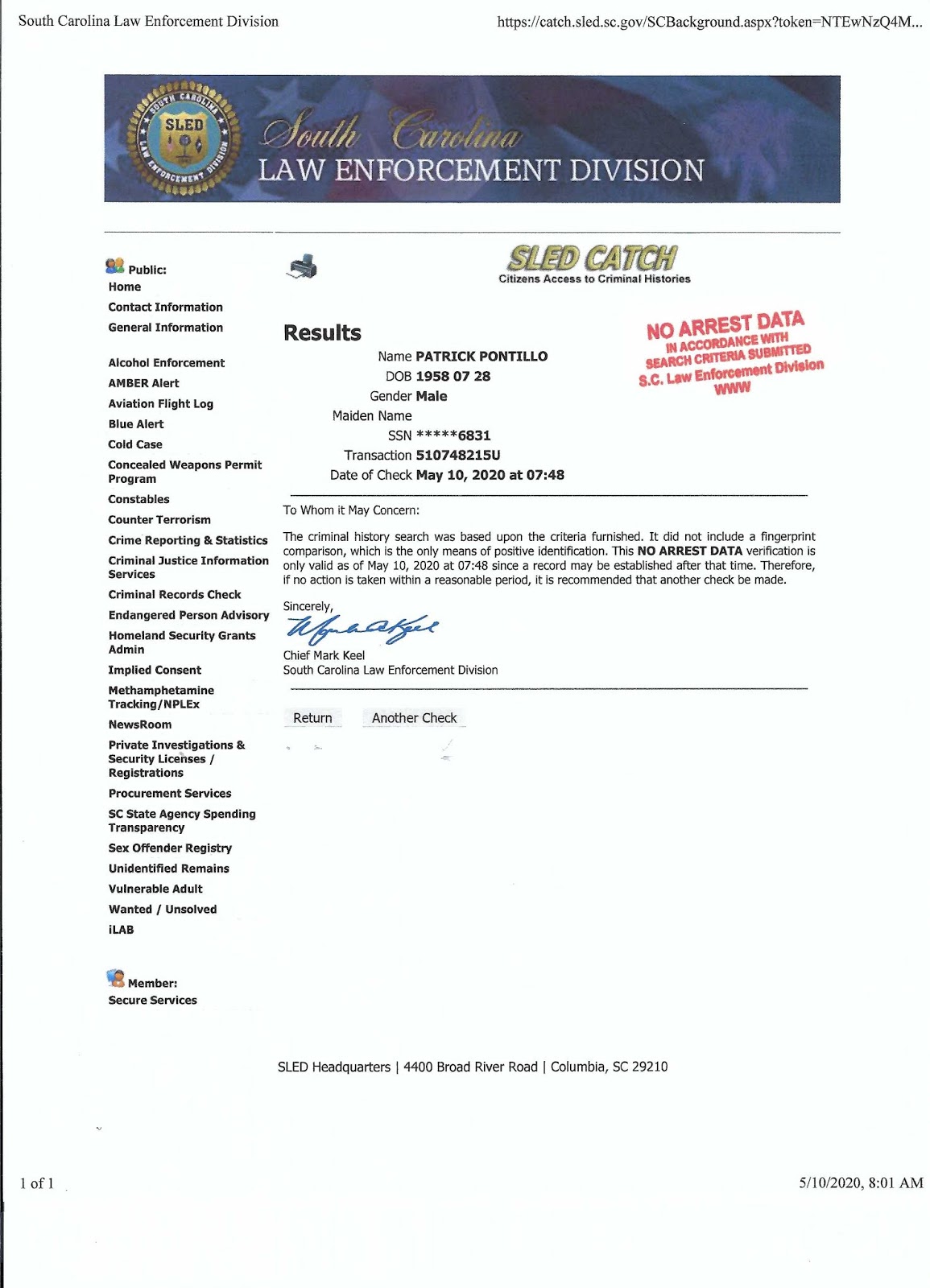 While we're at it, we might as well include my Year 2020 Pennsylvania State
Police Security Clearance Background Check Results.  In bold print is stated:
"***HAS NO CRIMINAL RECORD IN PENNSYLVANIA ..."

Now remember, when you are a whistle-blower, those in power and/or influence
will seek to demonize you with whatever ill tale they can tell.  They will do what
they can to have you written-off.  They will present things about in a false light.
They will twist stories and facts into their desired horror story of you.  If it's not
horror story they can devise, then they will twist things to make you look like a
silly buffoon who is not worth being regarded.

Their goal is to see to it that the public will not read what you wrote.  So, if you
are vehemently against whistle-blower retaliation, then read the writings of the
whistle-blower closest to you.  You can start with the contents of this site.

None the less, submitted for your evaluation, in the Court of Public Opinion, is
my Year 2020 Pennsylvania State Police Security Clearance Background Check.
Let us see what the next character assassination and/or defamation against me is
going be, in the never-ending hatred toward my existence.  Keep me updated.

The larger-sized copy below is there for the sake of font clarity. The smaller copy
is directly below, for the sake of revealing the full document, even though the font
in that copy is not clear enough for convenience.  All in all, the publishing of my
Year 2020 security clearances will not stop the attacks of my enemies.  The attack-
ing just keeps going on and on ... and on ... 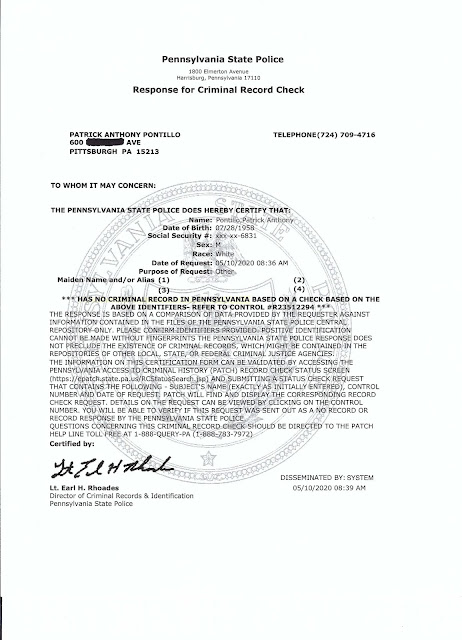 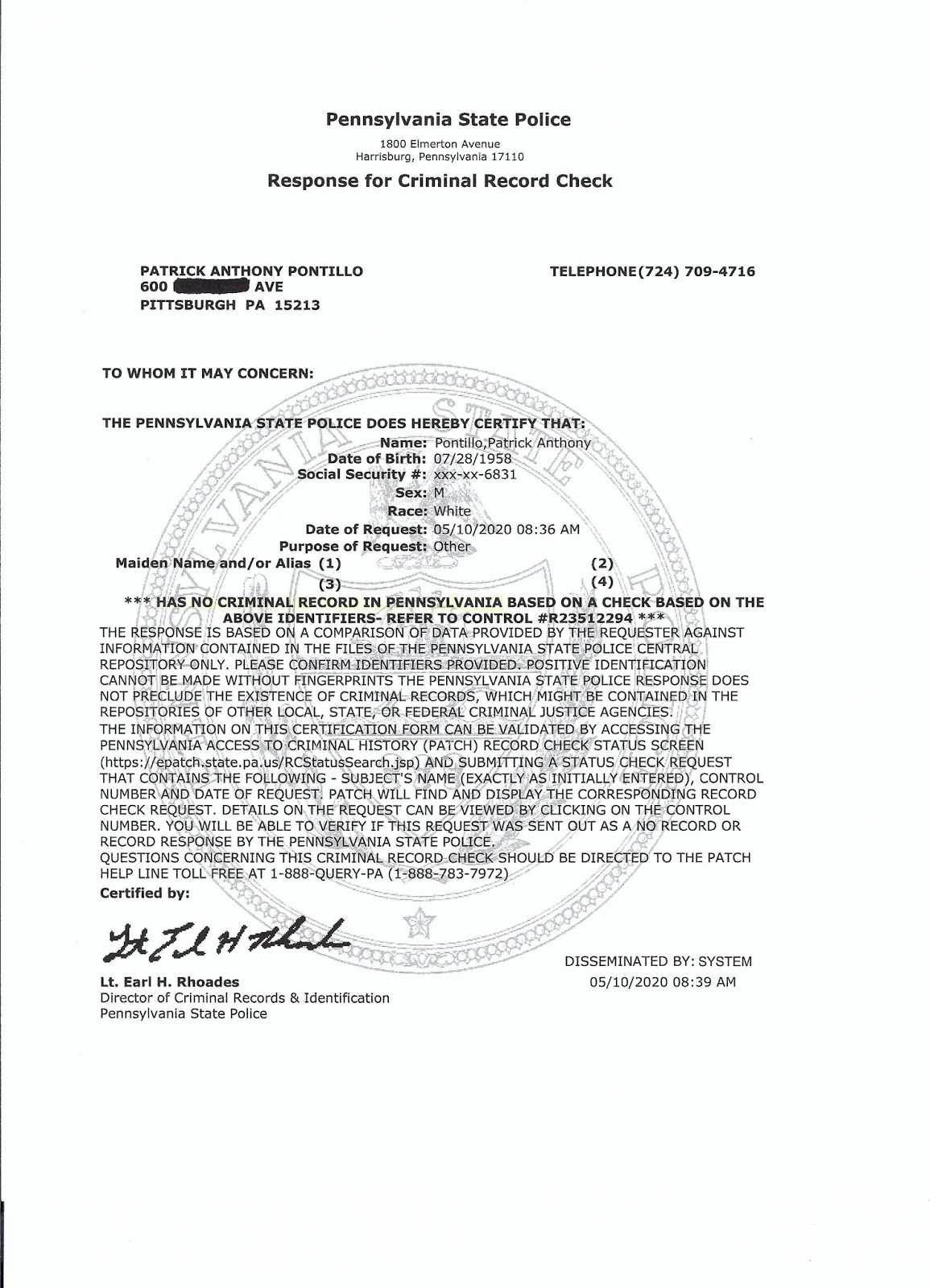