Proof that Wuerl ignored the Child Protective Services Act ... in his cover-up of Wolk, Zula, and Pucci, not to mention Zirwas, Hoehl, Paone, O'Malley, & Huff 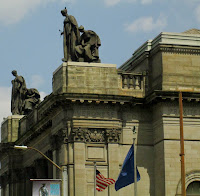 Keep in mind that the Donald Wuerl who retaliated against the children of
Risen Lord Parish, on account of their parents protesting against Wuerl on
TV, was praised as a loving and caring man who only cared about the wel-
fare of children.  Evidence proves that the picture of Wuerl-the-fatherly-
protector was a complete lie.  In fact, below is a photocopy of the evi-
dence that Wuerl only cared about himself.

A photocopy of a newspaper article reporting Phase I of Wuerl's uncovered
Triple Cover-up at the time it was uncovered is posted several paragraphs
below here.  Be patient and scroll down to it, so that you will learn how
dishonest Wuerl's propaganda machine always was and is.

This, alone, proves that Wuerl was not the caring and protective bishop that
his embedded propagandist, Ann Rodgers, (formerly of the Pgh Post Gazette)
made him out to be.  Tiny Donald Wuerl ... the Elevator Shoes Kid ... is one
big lie.  I personally learned of Wuerl's ruthlessness and manipulative modus
operandi during both phrases of the James Torquato Retaliations.  To this day,
Wuerl was NEVER man enough to have apologized for those whistleblower
retaliations.

Plus, if Wuerl ... or his then-diocese ... would have been indicted & convicted
for the offense of having concealed Frs. Wolk, Zula, and Pucci, it (or Wuerl)
would have convicted of nothing more than a Summary Offense, in having
violated the Child Services Protection Act.   This means that he ... or his then-
diocese ... would have been required to do no more than pay a fine.  However,
this would have made Wuerl look bad on record, during Vatican paper-reviews.
He probably wouldn't have become a cardinal,  if he or his then-diocese would
have been found guilty of violating the Child's Protective Services Act.

Contradiction Time:
Wuerl was made out to be a non-compromising disciplinarian,
but after the Wolk indictiment ... the opposite was illustrated.

"To say he will not be reassigned is a devastating thing," said Wuerl to the
press shortly after he was caught performing his triple cover-up which was
headlined with Father Robert Wolk's indictment.  The same Donald Wuerl
also said to the media, "It is NOT covering up to embrace a man who is
suffering."  Yet, Ann Rodgers, (formerly known as Rodgers-Melnick) of
the Pittsburgh Post Gazette had the audacity to deceive the public into be-
lieving Wuerl to be the bishop of zero tolerance that he never was. 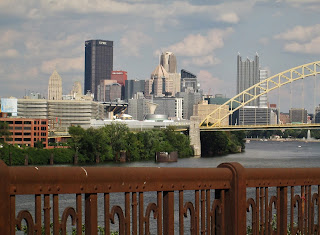 Add to this the fact that Wuerl already reassigned the notorious John Hoehl
months prior.  Wuerl had no intention of getting rid of Hoehl until the indict-
ment of Wolk.  Yet, the pathologically bland Ann Rodgers had the audacity
to make it look as if Wuerl were the instant disciplinarian from Day 1.  You
now see how far away from zero tolerance Wuerl was.  After all, he made a
criminal sound like a victim.  You can now also see how much of a liar was
Ann Rodgers of the Pittsburgh Post Gazette.  You need to keep in mind that
a faction who praises Wuerl seeks to have him to get the 2,000 year old Ro-
man Catholic Church to declare the repeatedly condemned Sin of Sodom
a holy act of God.  Apparently, such people have strong stomaches.

Now, in the Year 2002, when Donald W. Wuerl was being made out to be
the holiest male on Earth --- next to the molester Marcial Maciel who was
also lauded as a saint --- would you have been praising Wuerl if you knew
about his triple cover-up?  Would writers have been calling that fraud "one
of the good guys, if you they knew about DA John C. Pettit announcing to
the press that Wuerl was uncooperative during the investigation which re-
sulted in the indictments of Wolk, Richard "Sade" Zula, and Francis Pucci?

Would he have been made the Master of Ceremonies in a St. Patrick's Day
parade, if Pittsburghers knew about Wuerl's public excuse for covering-up
the crimes of three of his priests, followed by Wuerl publicly denying that
it was the act of covering-up at all?   Or would you have categorized him
with Bernard Law & Roger Mahoney?

Would you have been praising Wuerl that year, if Ann Rodgers and the
Pgh Post Gazette were honest enough to report on the James Torquato
case?  It's the case of a former personal secretary of Wuerl spending con-
secutive years not keeping his hands to himself and then retaliating the
moment he was reported.  You know, the Torquato case has dozens of
pieces of evidence attached to it.  It is the single most evidence support-
ed cover-up of Donald Wuerl.

Wuerl was headlined as the bishop who fought the Vatican to remove  "a
molester priest," when the fact is that he only attempted to have the priest
removed from ministry for what was later called a misdiagnosis of Depress-
ion and Suicidal Tendencies.  The priest was never arrested, yet Wuerl let
the papers claim that the priest was.  In fact, that priest, Anthony Cipolla,
received a favorable Pennsylvania State Police background check security
clearance in the Summer of 2014, where within it was stated that Cipolla
has NO ARREST RECORD in the State of Pennsylvania.  For those of
you who are brain dead, Cipolla's 2014 security clearance of a huge deal.

This triple cover-up also shows Wuerl's motive in letting Anthony Cipolla
be the public scapegoat whose reputation was completely annihilated, de-
spite the overwhelming evidence of Cipolla being the opposite of the media
smear campaign launched against him.  You see, DA John C. Pettit publicly
stated, (and I am going by memory on this quote, meaning that it is to be re-
garded as paraphrased:  "I don't want to make this look like a witch hunt, but
we would be sticking our heads in the sands to think that this is an isolated
incident."  This meant that there would be more investigating . . . there was
to be more "snooping around," "looking around," "scrutinizing."  So, Wuerl
needed a diversionary tactic, to pursuade the law enforcement personnel in
more than one sovereign state involved to be deceived into thinking that
Wuerl was a staunch "zero tolerance" leader.  Wuerl was proven to be
no such person.

Wuerl was in a law enforcement spotlight.  This meant that Wuerl needed
a smokescreen, to deceive the public into thinking that he was a holy and
all so caring saint.   Wuerl did nothing more than masquerade himself as
an angel of light, at the expense of others such as an Anthony Cipolla who,
unlike the effeminate Donald Wuerl, was found to have zero nexus with the
homosexual subculture.  Wuerl, on the other hand, had a definitive nexus
with the neo-Sodomite world. 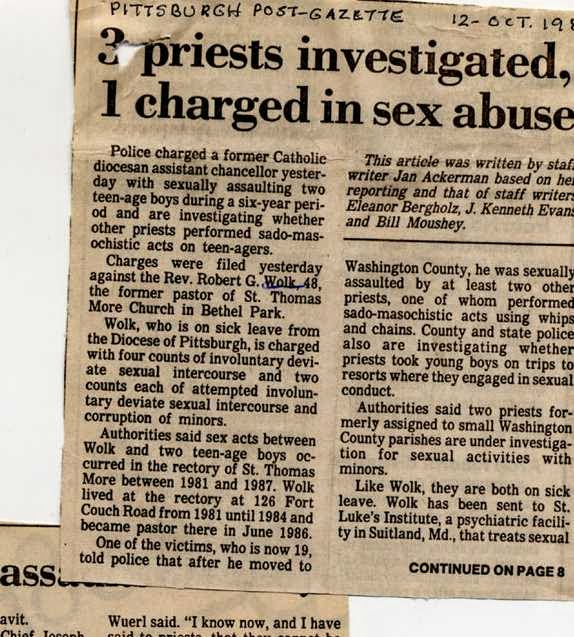 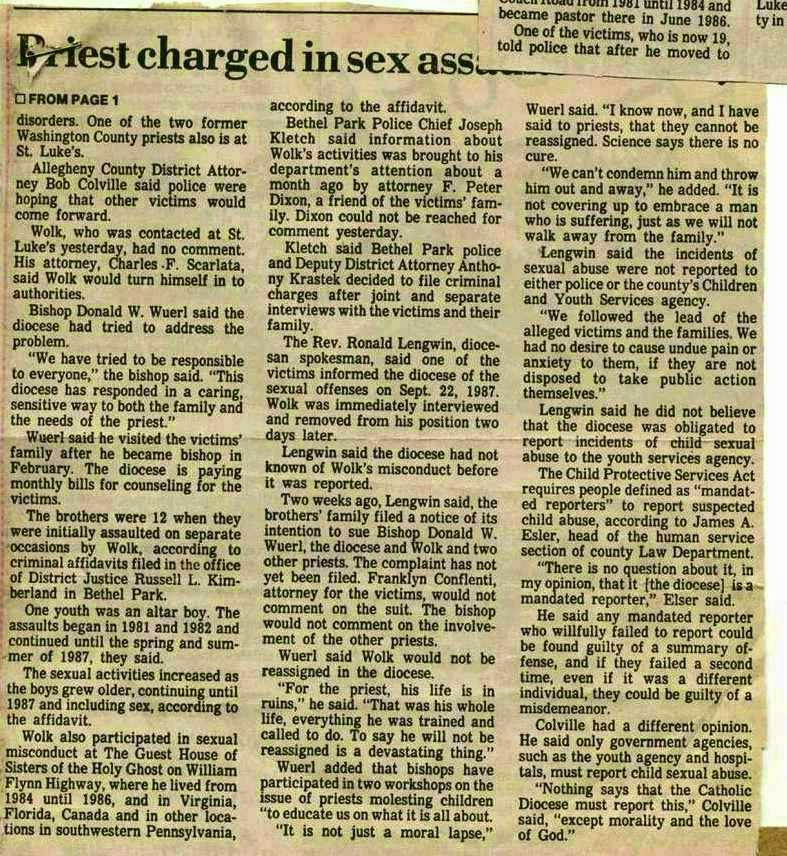 The newspaper jpegs above prove that the slightly built Donald Wuerl
thrived on a propaganda machine filled with sleight of hand deceptions
and direct falsehoods.

In addition, don't forget that he rode the coattails of John Cardinal Wright,
and without the help of the allegedly homosexual John Wright, the Donald
Wuerl who accommodated banned Dignity Masses for eight consecutive
years would have been nothing.

It was the court system that prompted Wuerl to strike the pose of a strict
disciplinarian.  It was all a fraud to have claimed that Wuerl would come
to the rescue of the victims of predatory priests such as the Edward Huff
whom he kept hiding out in mental institutions and the Father James Tor-
quato whom he sent to Rome while federal court papers had Torquato's
name mentioned throughout them.  Wuerl's artificial pose did not occur
until three simultaneous indictments of three Pittsburgh priests occured
under Wuerl's watch, coupled with a DA John Pettit's public accusation
that Wuerl's diocese performed uncooperative conduct with police inves-
tigators.

Keep in mind that there was no criminal investigation of Wolk, Zula,
and Pucci until an attorney friend-of-the-family of the two young play
toys reported the matter to the police.  The attorney did not do so until
after Wuerl visited the family. Despite visiting the family, Wuerl still
refused to report Wolk, Zula, and Pucci to the police, as was required
in the Child Protective Services Act.  Now you can see more clearly
that everything about Wuerl is either an outright lie and or sleight of
hand deception.

In addition, Wuerl only went to the home of the traumatized family af-
ter their parish pastor was told by them that they were going to report
the three molester priests to law enforcement authorities.  The pastor
then informed Wuerl.

Do not be deceived.  Ann Rodgers made it sound as if Wuerl were a
strict disciplinarian who ousted Hoehl, as soon as he learned of him.
No, Wuerl placed Hoehl into chaplaincy ministry, as he did with Huff.
Wuerl did NOT read Hoehl the riot act until Wolk, Zula, and Pucci
were criminally indicted.  Then, Hoehl became a hot potato.  Wuerl
got rid of Hoehl, so that Wuerl would not get into trouble.  There was
no loving and caring bishop involved.  I tell you solemnly, Wuerl was
absolutely vicious and heartless while in Pittsburgh.  He was the per-
sonification of lies and retaliation.

As a  review, so that it will be clearly understood:

Now, Pgh Post Gazette reporter Ann Rodgers claimed that Wuerl had
an epiphany while visiting the traumatized family and then became the
"model of zero tolerance" thereafter.  This claim is easily proven false
by the fact that District Attorney John Pettit publicly announced that
Wuerl's then Diocese of Pittsburgh did NOT provide the cooperation
that the district attorney sought during the criminal investigation.  It
was a criminal investigation which didn't commence until someone
other than Wuerl notified the police.

If Donald Wuerl were the model of zero tolerance, he would have been
the one who reported Wolk, Zula, and Pucci.  Plus, Wuerl would NOT
have allowed the 'foot dragging' that a Western Pennsylvanian DA said
was being committed by Wuerl's diocese.  Neither would Wuerl have
reinstated Hoehl and Huff.  That which was told to you by former
Post Gazette writer, Ann Rodgers, and FoxNews are proven false-
hoods.