The $43 million lie: The claim that Wuerl lives in a modest residence.

Wuerl's $43 million Marie Antoinette Abode is actually another cover-up of Cardinal
Wuerl.  This is because Wuerl was made out to be a holy ascetic saint, living in a clos-
ed school.  That was a complete lie in that the first floor of the Embassy Row structure
is still a school.  However, it's called a learning center.  Well, that's what a school is.

The cover-up of Wuerl's lavish residence ... which spits in the face of a Jesus Christ
who slept on fishing boats and even the ground ...one was uncovered by the George
Neumayr whom attack dog Bill Donohue assassinated in character.  For those new
to the World of Cardinal Wuerl, Bill Donohue was a Pittsburgh-area professor who
ever-so-coincidentally became president of the Catholic League during Wuerl's ten-
ure there.  Donohue then proceeded to turn that organization into a dictatorial one-
man show, hogging the handsome salary allotment of the 501(c) charity.

It's hypocritically ironic that a person shamelessly goes about, making a hefty salary
off of a charity.  It's much like embezzlement, to say the least.  It certainly turns-off
people to the Catholicism which Donohue feigns to protect.  Of course, Donohue is
only protecting his financial accounts, giving the appearance of diligent service to a
church which is actually serving Donohue, instead.  Donohue is one of Wuerl's pit
bulls.
In multiple Wuerlgate articles,  I made mention of Cardinal Wuerl's Warwick
Terrace residence.  It was his dwelling while he was Bishop Donald Wuerl of
the Pittsburgh Roman Catholic Diocese.  I even posted photos of envelopes
which had as the return address 5078 Warwick Terrace, Pittsburgh PA.

It's located near the 5th Avenue mansions of Pittsburgh and Carnegie Mellon
University from where came the world's first robotics institute.

It's comprises 24 total rooms, 11 bedrooms, and 6 bathrooms.  It was built in
1911 and was later donated to the Diocese of Pittsburgh in 1949.  It contains
an elevator, a wine cellar, and a fireplace. All in all, it has 9,986 square feet
of living space.

In addition, the yearly property tax for the residence stood in the vicinity of
$44,000.  Cardinal Wuerl's immediate successor, David Zubik, put it up for
sale, with a $2.5 million asking price.  It sold at $2 million.

Now, journalist Christopher Lamb, in sleight of hand deceptiveness, made it
sound as if Wuerl's Washington DC residence is a modest and austere setting.
He listed Wuerl amongst those bishops living in modest dwellings, describing
Wuel's present residence as "a flat above a now closed Catholic school."  He
therefore made it appear as if Wuerl were living in an abandoned warehouse.

Well, Wuerl presently lives in a $43,000,000 structure situated along the ex-
tremely luxurious Embassy Row.  He lives in the top floor penthouse which
happens to be furnished lavishly.  More specifically, Donald Marie-Antoinette
Wuerl  is located at 2200 California St., NW, Washington DC  20008.  Wuerl
is in the fourth floor penthouse.  Both places were more suitable for Louis XVI
& Marie Antoinette than for Sts. Francis and Clare of Assisi.

Now, the entrance road that takes one into the Warwick Terrace area is some-
thing I've passed at least 1,000 or 2,000 times or more.  This is simply because
Wilkins Avenue is the entraceway to Warwick Terrace and Wilkins is a busy
street that connects to 5th Avenue.  Sometimes I travel on Wilkins four and
six times a day.  So, one day I walked up to Warwick Terrace and took a few
photos of Wuerl's former residence for evidence purposes.  I wanted to make
sure that the reading public will be readily able to learn that the claim of Don-
ald Wuerl ever having lived in any type of modest setting as a bishop is a lie.

Again, this pictorial of Wuerl's swank Pittsburgh residence is only posted here
because of all of the false propaganda which presents Wuerl as an ascetic and
self-sacrificing angel of light.  Satan masquerades as an angel of light.  And so
do his servants. 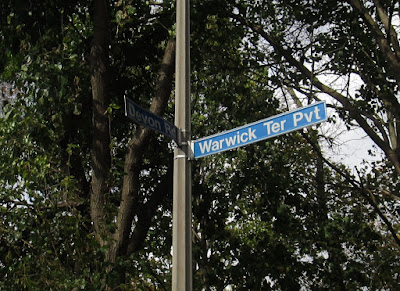