Fr Edward Huff Case: Wuerl Reinstated him. Yet, he would be indicted & convicted.

Let us review, the life of Cardinal Donald Wuerl is one contiguous
lie, always and in every way.  For example, Donald Wuerl did NOT
single-handedly or collectively write the Teachings of Christ.  Wuerl
lied to the media about having done so in 1979.  Wuerl was merely one
of three editors.  A multiplicity of writers wrote that catechism book,
and Wuerl was NOT one of them.

Let us adjourn to the Edward Huff case.  This is one of Wuerl's bigger
frauds, simply because, while Wuerl was being praised as a great noble
fighter against the evil evil Vatican in the Anthony Cipolla Case, Wuerl
was actually covering-up the sexual crimes of Fr. Edward Huff, as well
as Frs. Ernest Paone, William O'Malley, John Hoehl, & George Zirwas,
not to mention John Wellinger.

Concerning Huff, Wuerl literally reinstated him, as much as Wuerl re-
instated John Hoehl the first year Wuerl was RC bishop of Pittsburgh.
So, imagine the following:

Wuerl was covering-up Fr. Edward Huff, while being paraded
around the media outlets as the overly heroic bishop of zero
tolerance.

EWTN, decades later would claim that Wuerl removed 18 of 19 priests.
Of course, EWTN has to count the Huff case, for them claim to be true.
Well, their claim is a big lie.  Incidentally, Wuerl reinstated John Hoehl,
too.  Then he got rid of Hoehl as soon as Bob Wolk was indicted.  Thus,
it is an outrage for EWTN to claim that Wuerl removed Hoehl as if to be
a responsible and caring zero tolerance bishop.  EWTN needs to go off
the air as much as Wuerl needs to do.

The added irony to this is that Wuerl worked in Rome, as a cardinal's per-
sonal secretary for ten consecutive years.  So, if the Vatican is as evil as
the media made it out to be in Wuerl's pursuit of the Cipolla Case, then
Wuerl is equally as evil, with ten years of said evil under his proverbial
belt.

For those who do not read well, let's repeat this thought:

1)  Wuerl was made out to be a heroic champion, fighting an
evil & wicked Vatican.

2)  Wuerl worked in Rome, under John Cardinal Wright, for ten
years.  Wuerl could not have seen the Vatican as so torturous-
ly evil as the 1990s press released on the Cipolla Case made
it out to be ... or or or Wuerl was a ten year accomplice of
Vatican corruption.  Let's continue.
For those unaware, Huff was Wuerl's "ping-pong cover-up."  Like a ping-pong
ball, Huff was sent between Pittsburgh and Saint Louis.

Christopher Dickey once wrote that Donald Wuerl was on record declaring
zero tolerance for priests accused of sexual abuse 14 years before it became
public policy.  Well, Wuerl did NOT observe, did NOT practice, and did NOT
fulfill what he declared.  This is proven in the Wolk, Zula, and Pucci cover-up,
as well as in the Edward "three-times-reported" Huff case, along with the cases
involving Frs. Hoehl, Paone, Zirwas, Wellinger, & O'Malley.  Add Torquato to
the mix.  The cover-up of him continues, because his target of sexual aggression
was over the age of 18.  In Wuerl's Pittsburgh diocese, if a person were over the
age of 18, he was fair game, and a priest could wreak havoc on his life without
Wuerl objecting, at all. 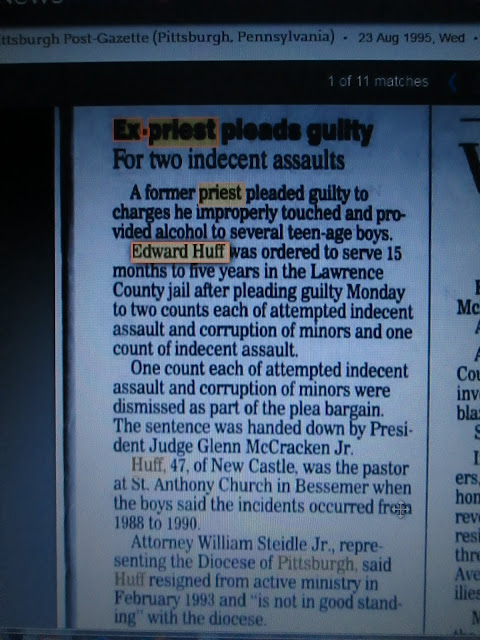 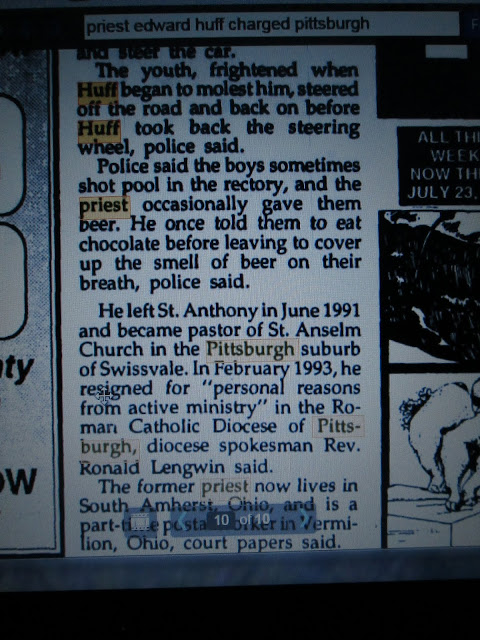 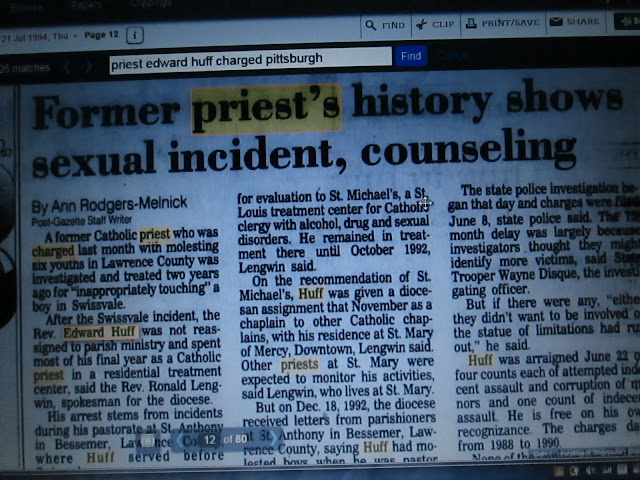 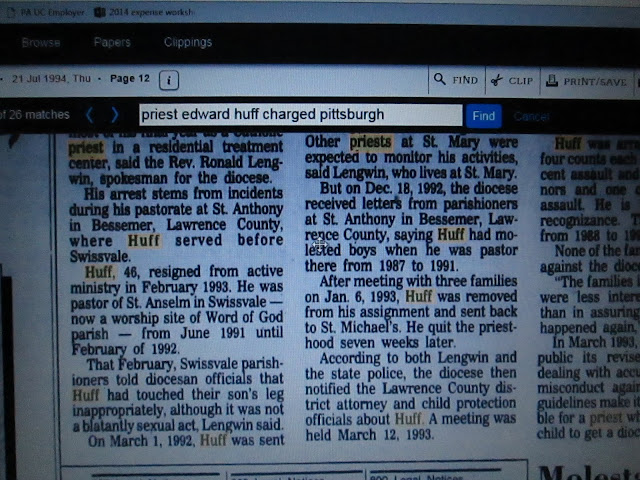 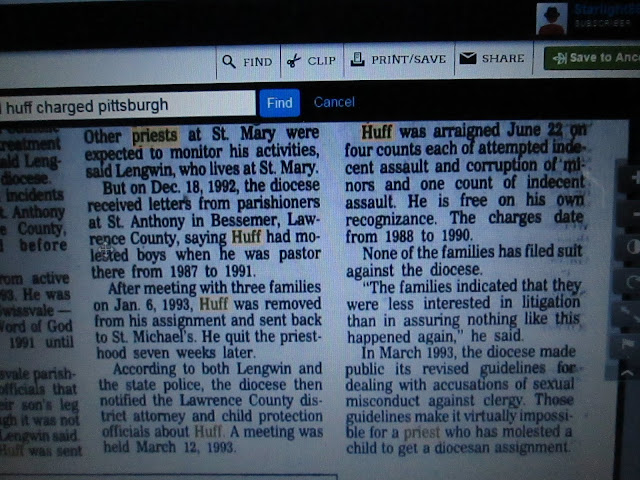