The Krawczyk Case: 7 years probation in death; the death of another. 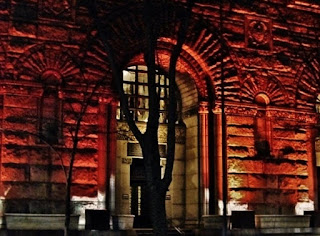 After Wuerl was unofficially deemed the model of zero tolerance,  there was
the 2003 arrest and arraignment of a Fr. Henry Krawczyk who was previous-
ly reported to Pittsburgh diocesan authorities for unbecoming conduct.

Donald Wuerl knew of the prior allegations against Father Krawczyk before
that priest set the scenario for the sudden death of former Pitt football player,
Billy Gaines.  If Wuerl were not negligent in that matter, chances are that the
young Billy Gaines would not have died an alcohol-related death, twenty hours
after having fallen from a Pittsburgh diocesan catwalk onto one of its church
pews.  Plus, ther parish wouldn't have been receiving the Playboy Station, dur-
ing that time.

In addition, the August 2018 PA Grand Jury Report attributed a suicide to the
same Fr. Krawczyk.  It involved the youngest brother of a family who, accord-
ing to a memorandum, would indulge in alcohol with Krawczyk and whatever
it was that got them high.  The same youth was woke up after an alcohol binge
and found Krawczyk performing an unnatural act upon him.  Of course, in my
ancestors' Renaissance Italy, such priests literally got the death penalty for such
conduct.  None the less, the suicide occurred in 2006, after Krawczyk was put
into the criminal court system, only to receive probation.  None the less, being
a molester priest can be quite deadly.

The thesis statement is this:

Wuerl was made out to be a deeply caring bishop who would risk his life for
humanity..  Meanwhile, Wuerl was living in Marie-Antoinette-Luxury and
had gotten away with the Torquato Retaliations that he de facto ratified.

Wuerl was made out to be deeply caring, but he completely ignored the plight
of hundreds of million sweatshop workers throughout the world whose pro-
ducts flooded the American market and typical American home.

His cover-up of Wolk, Zula, and Pucci was given a rewrite, where he was made
out to be the wise overseer, instead of an aggravation to law enforcement per-
sonnel and the family stung by three Pittsburgh diocesan priests.

The Wellinger case was a persona non-grata of its own, and Wuerl's reinstatement
of former high school headmaster John Hoehl was denied so much so that writer
Ann Rodgers made it look as if Wuerl immediately read Hoehl the Riot Act and
ran him out of town.  Curiously enough, however, the Huff indictment and con-
viction was mentioned in the papers during 2002, when the Wuerl-for-God cam-
paign was working overtime..

If he really cared, he would have been sure that human life would not have been
in jeopardy, as was the case in the first wave of the Torquato Retaliations.  Wuerl
proved his unfittingness-to-rule,  when he looked the other way.

Concerning the realization that Donald Wuerl was not motivated by conscience,
but by law enforcement authorities, take note of the following statement made by
author and expert witness, Richard Sipe.  It was published in the March 11, 2002
edition of USA Today:

"It is only the court system and the media that have forced the Church to
take more reasonable action.  There is a very significant lack of moral
leadership within the Church to face up to this problem, because they're
afraid of what it will uncover of higher-ups in the Church."

It was the court system which compelled Wuerl to announce a zero tolerance
policy.  It took the indictment of the Father Robert Wolk.  The 2002 media then
forced Wuerl to remove several priests attached to credible sex abuse accusations
whom Donald Wuerl had been keeping in ministry.  At the start of 2002,  Wuerl
was incapable of claiming that his diocese was free of priests accused of molest-
ing youth.  Only after the media exploded with report after report of sex abuse
cover-ups did Wuerl finally remove those priests.  He removed the preists out
of political pressure.

Wuerl's zero tolerance image was nothing more than unconscionable propaganda,
especially in light of the fact that court briefs were filed against his diocese in 2002,
at the US Supreme Court's Clerk of Court's Office.  Furthermore, Wuerl's former se-
cretary was still in ministry during that year, showing Wuerl to not be the model of
zero tolerance that he was made out to be.  In fact, he would soon assign his former
secretary to a parish pastor's post, effective New Year's Day 2004.

The 21st Century praise given to Donald Wuerl by the media was an act of coward-
ice, as if telling the truth about a corrupt bishop would have resulted in the ultimate
destruction of all mankind.  This era of mankind has been one in which the media
deceived the public in a number of topics.  Concerning the topics, Donald Wuerl is
merely one of many.  Concerning corrupt bishops, Wuerl is merely one of many.

A courtesy email that Richard Sipe sent me in 2009 surprised me, because he de-
scribed the Donald Wuerl power play in the following way: