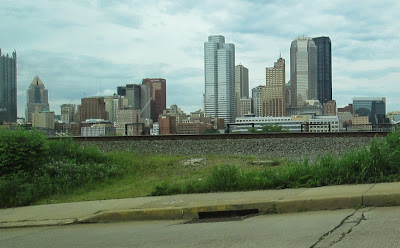 The change-the-subject letter below was the one that Donald Wuerl wrote
shortly after he was caught performing his Triple Cover-up.  Actually, it
was the result of the Wolk indictment.  Wolk was the first of the three di-
ocesan priests to get indicted during the end of Wuerl's first year as local
ordinary of the RC Diocese of Pittsburgh.  Another word for local ordi-
nary is "bishop."

Wuerl stated that there was so much to do that Pittsburgh didn't have time
to think about his then-diocese having become one of the first dioceses to
be scathed in what was to become a coast to coast Watergate of perversity.

Wuerl was not clever in his evils.  He was a sophomoric writer, especial-
ly when comparing him to the laureates with whom I was published in a
couple literary anthologies.  He simply had a propaganda machine and a
few in-the-pocket politicians who cow-towed to him, on account of the
fear that not doing so would offend Pittsburgh's Catholic voters.  They
didn't accept the fact that the devout Catholics of Pittsburgh saw Don-
ald Wuerl as the enemy.

Proof that the devout Catholics of Pittsburgh saw Wuerl as the enemy
consisted in the amount of lawsuits filed against Wuerl, as well as com-
plaints sent to Rome against Wuerl ....... not to mention the complaints
against Wuerl leveled to the U.S. Papal Nuncio's office in Washington
DC, as recently as the Year 2015.  The most common nickname for
Wuerl, while he was in Pittsburgh, was Whirlybird.  This goes to
show that Wuerl was widely disrespected by any layman and lay-
woman who had any dealings with him.  He was a vicious brat. 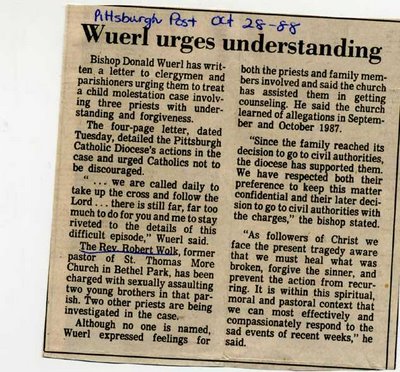 Keep in mind that Cardinal Wuerl rose to power by riding John Cardinal Wright's
coat tails.  If Wuerl weren't Wright's long-term secretary, then Wuerl would have
been a nobody in terms of power and influence.

If Wuerl didn't ride Cardinal Wright's coat tails, Pittsburgh would have many
more Catholic parishes and priests than it has today.  Pittsburgh wouldn't have
been the last city to end the heretical Dignity Masses which can be described
as Sodom & Gomorrah Masses.

In addition, the deacon whistle blower (previously reported at Wuerlgate) would
have been a priest at this hour, and chances are that James Torquato would never
have been made a parish pastor.

In addition, Catholic Church property would not have gotten into masonic hands.
Tim Bendig would be a no-name.  More importantly, sweatshop labor profiteering
would not have been ignored in Pittsburgh, especially in light of the fact that it was
a city famous for championing worker's rights.