The common name found in the Wellinger obituary and the DA seating arrangement report.


In case you are missing the point, the Adam Ference attempted murder
investigation occurred in Pennsylvania, and it was truncated, to the con-
venience of Donald Wuerl.  Now, Pennsylvania is the Sandusky State,
the Bevilacqua State, the Luzerne County Cash for Kids State, and the
Donald Wuerl triple cover-up State where Wuerl faced zero charges for
having violated the Child Protective Services Act.  In addition, Wuerl
faced zero disciplinary action, despite the fact that he was accused of
having committed foot dragging throughout a criminal investigation.

Plus, Pennsylvania is the State where Cardinal Donald Wuerl ratified the
Torquato Retaliations and made the life of Father Donald Sotak's credible
accuser a living Hell, when the fact is that Sotak's credible accuser should
have been ordained a priest long ago.  Yet, Wuerl chose Torquato, while
pushing out Sotak's accuser.

Furthermore, Adam's father, Mike, lost his management job shortly after
the shooting, and major customers were the Catholic schools and colleges
nearby.  Mike was told that, all of a sudden, clients were complaining about
him.  But, this never happened before.  Thus, Mike got letters of recommen-
dation from some of his clients which stated how pleased they were with
Mike.  In as much, who were the clients suddenly complaining about Mike
after he made it known that he intended to investigate the cause of his son's
attempted murder.  It also occurred around the time when Mike sued the
Diocese of Pittsburgh, for negligence.  Then Mike was gone.  Wuerl's
handling of Adam Ference's attempted murder caused Mike untold men-
tal trauma.  Thus, Wuerl is no "holy holy man," in that he was incapable
of being back to Mike's life that peace that was robbed of it on Pittsburgh
diocesan property.

The investigation into Adam Ference's murder suddenly ceased, with no
conclusions as to the shooters' motives and influences.  In addition, keep
in mind that, after he returned to school, Adam was allegedly threatened.
A hostile individual allegedly mentioned that wanted to kick Adam in his
head wound, among other things.  Adam was then taken out of the Cath-
olic school under Wuerl's jurisdiction and home-schooled.  This means
that Donald Wuerl did nothing for the Ference family, except let it be
terrorized by one of Wuerl's attorney's during a deposition.  There was
also the matter of a few neighborhood kids allegedly terrorizing the
Ference family.  Thus, Wuerl was an extremely weak leader.

Below is the jpeg of a district attorney document.  It is the seating ar-
rangement of the bus where the young Adam Ference was shot and
where Bobby Butler committed suicide.  Also below is a link to the
obituary of the John Wellinger who was accused of being a molester
priest in a lawsuit which was settled out of court.  The lady named in
the obituary as John Wellinger's "devoted home companion" was ever
so coincidentally the aunt of one of the students on the bus.

At the very least, it's quite a coincidence.  However, the suspicion was
that the young Bobby Butler was influenced by occultism, in his shoot-
ing of Adam and himself.  Now, it was proposed or suggested or con-
jectured or suspected or alleged that Pittsburgh diocesan priest John
Wellinger had an affinity to occultism in one way or another.   One of
the questions left unanswered was if this John Wellinger was an influ-
ence on anyone who influenced Bobby Butler, if not Bobby himself.

Ironically, this John Wellinger officiated at Bobby's funeral.  None the
less, it is imperative for you to keep in mind that it was the local law
enforcement officials who set forth the possibility or probability that
Bobby Butler was engaged in a devotion to the occult, meaning that
his occult influence might possibly have provoked his deadly actions.

Ironically, the person who went on to the bus and took the gun out of
Bobby Butler's hands was the Boston-area brother/teacher who was
twice accused of molestation, but who claims that he is innocent of the
accusations.

To add to the theatrics of the day, the same Brother Ghastin was later
rushed to the hospital, suspected of having had either a heart attack or
angina, or some type of sudden illness related to chest pains.

Let it be known that, during the time following Adam's surgery and re-
covery, there was a media blackout.  Therefore, this case didn't get
very much public exposure.  Mike Ference, at the time, was too trust-
ing of the police and the church hierarchs.  In hindsight, Mike wishes
that he didn't agree to the media blackout.  It only helped Wuerl and
the others in power.

There has to be some reason why this case gnaws at Mike Ference,
to the point of having robbed him of his peace.  Well, Donald Wuerl
robbed a number of peace of their peace.  None the less, Mike has
a right to closure and the truth. 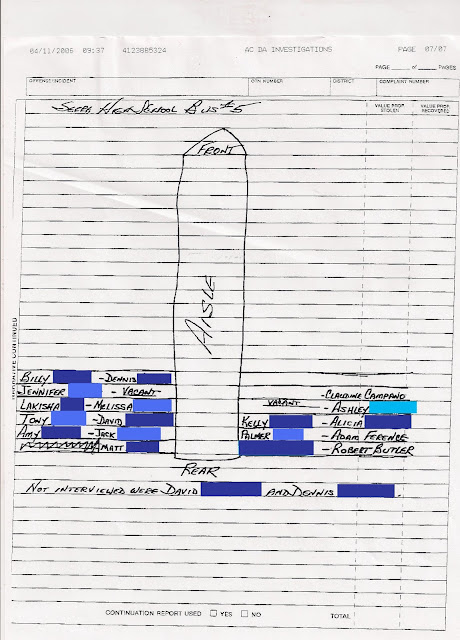