Wuerl's Decisive Factor in His Signatura Reversal over Cipolla: An Archbishop Zenon Grocholewski who, as policy, sided with a bishop over the bishop's subordinate priest. 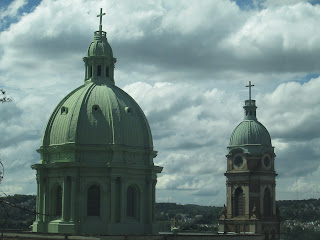 The decisive factor in Wuerl's
"amazing" Vatican Signatura
reversal wasn't amazing.  No
new evidence was known to
have been in the brief case(s)
Wuerl was said to have taken
to Rome.  The only major fac-
tual inaccuracy was that the
founder of St Luke's Institute
had died, and that Saint Luke's
reformed its diagnosis policy.
For those of you unfamiliar, Donald Wuerl was tooted as a bishop who fought
the Vatican "to remove a molester priest."  Stop there.  There was NEVER any
evidence or credible witness accounts that the priest ever molested anyone.  The
woman who accused him of molesting her son one time decades ago was caught
lying about it, via fact checking.  After all, she claimed that the priest was arrest-
ed.  However, the priest was never arrested anywhere at any time for anything.

In addition, the Tim Bendig who claimed that the priest molested him for six con-
secutive years is a known liar who even lied to me and threatened to destroy my
life, followed by him begging me to interview him, even to the point of promis-
ing to let me see his lawsuit's deposition which was already located prior to him
turning into a begging coward.  Something that Bendig wrote to me was entirely
contrary to the modus operandi of a true molester.  Therefore, Bendig's own words
weakened his case completely.

The accused priest, an Anthony Cipolla, was found to have a  history contrary to
any molester and any homosexual.  Ironically, we found that the effeminate Don-
ald Wuerl had an extreme nexus to the Sodomite world.  In as much, Wuerl had
motive to use Cipolla as a smoke screen, being that District Attorney John Pettit
already accused Wuerl and his diocesan administrators as impeding the criminal
investigation of three priests Wuerl covered, none of whom was Anthony Cipolla.

Wuerl also had motive to cover the accusations leveled against his former boss,
John Cardinal Wright.  Now, Wright was directly accused by an individual who
claimed to have been paid $20 per Sodomy session, in regular intervals.  Wuerl
never reported Wright to any authority.  Thus, Wuerl was either complicit or
clueless.  If he were complicit, he was engaged in criminal conduct.  If he were
clueless, then it shows him to be a terrible leader who should never have been
ordained a bishop in the first place.  Ironically, the male present nicknamed
Wuerl the Girl only rose in power because of his nexus to John Wright, an
accused sex criminal.

The big mystery about the Vatican rehearing was claim of  "the major factual
inaccuracies."  The "inaccuracies" were never revealed to the public.  Well,
after three years of occasional research, the answer would be eventually be
found.  It's mentioned below.  None the less . . .

The reversal that Wuerl won didn't have anything to do with anything Wuerl
said at the hearing where Cipolla was absent.  That is to say that Wuerl was
NOT known to have performed any great oration at the hearing which ended
up changing the hearts of any Vatican officials.  If Wuerl did so, his speech
would have been published in all of the Pittsburgh newspapers and on a few
Pittsburgh walls, as well.  Instead, after Wuerl won his reversal, the front
cover of a major Pittsburgh newspaper had a full length photo of Cipolla.
This was because they had NO words with which to fill in the space.

In conclusion, there are was no indication that Wuerl used any evidence oth-
er than that which was used in the first round.  All that he was able to do was
state that the diagnose of Anthony Cipolla, by St. Luke's Institute, was not
done under the management of an out-of-the-closet homosexual who advo-
cated pansexualism.  That same diagnosis could now be applied to the new-
ly acquired definition of psychic defect.

Keep in mind that the Signatura ordered to be given the definition of that one
phrase.  Then, after Wuerl won his reversal, he presented the case in a very
false light.  All that Wuerl claimed at the Signatura was that Cipolla was sad
and might kill himself.  If you have evidence to the contrary, then send it now.
If you know the aforesaid to be true, then confirm so.

Concerning the only "major factual inaccuracy"
found in the Cipolla case, it goes as follows:

Firstly, Wuerl's only evidence against Cipolla was the diagnosis of a St Luke's
Institute in Maryland.  It's doctor(s) who assessed Cipolla simply stated that Ci-
polla suffered from Depressin & Suicidal Tendencies.  In as much, the Vatican
Signatura, in the first hearing, judged that the diagnosis given  to Cipolla was
invalid.  It's reasoning was that a place operated by an out-of-the-closet homo-
sexual who advocated pansexualism did not have valid diagnoses.

The Vatican Signatura's ruling was written in 1993.  Well, the founder of Saint
Luke's Institute died of AIDS in 1987.  Thus, in 1993, St. Luke's was no longer
being operated by an out-of-the-closet homosexual who advocated pansexual-
ism.  Therefore, the time line enabled a person to reconsideration if whether the
assessment of Saint Luke's was valid or not.

The aforementioned is the ONLY major factual inaccuracy found in four years
of co-research.  In as much, if media hog, Donald Wuerl, had any damning evi-
dence against Cipolla, you can be reasonably assured that Wuerl would have
had the evidence published in the newspapers & aired on Television,  All that
was published in the newspapers were a number of falsehoods and sleight of
hand deceptions which made Cipolla look like the monster that he was never
proven to be.  In fact, the newspaper testimony of the 1978 accuser was easy
to prove false.  The problem was that no one did any fact checking for years.

Plus, it had long since been concluded that 1988 accuser, Tim Bendig, was a
perpetual liar who might have plagiarized the 1978 accusation which has zero
evidence or witnesses to support it.  In fact, Bendig's lawsuit was so weak that
his attorney had to use the 1978 case in very exaggerated and fraudulent terms.

The 1978 case was presented in a false light.  Rather, in the early 1970s Cipol-
la was given plaques of appreciation for his services in two youth groups, and
no one in those groups ever accused him of any ill conduct.