Yes, I Spoke with Mark Ninehouser and he said that he never arrested Cipolla and never filled-out any police report in cursive handwriting. 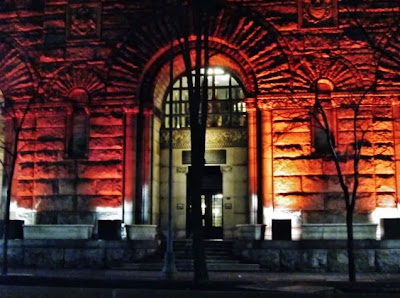 Quick March 2017 note:  More information of the Edward Huff case is
forthcoming.  The Huff Coverup, alone, proved former Pittsburgh Post
Gazette writer, Ann Rodgers (formerly Ann Rodgers-Melnick), to have
been nothing but Wuerl's propagandist.   That was an abuse of the press.

It is now Liberation Day for all of those who believed in the good character
of the man formerly known as Father Anthony Cipolla.  In late February of
2017, I finally made contact with ... and conversed at will with ... one of the
two police officers who responded to Diane Thompson's phone call to the po-
lice, in 1978.  Randy Engel stated that they arrested Cipolla.  In fact, Engel
stated that they were detectives.  No, there weren't.  None the less, one of
the two police officers who Engel claimed to have arrested Anthony Cipol-
la categorically stated that he did NOT do so.  Engel is now dangling at
the edge of a business-destroying lawsuit which has a statute of limitations
a lot longer than the average American attention span.

Randy Engel's didn't merely accuse Anthony Cipolla of molestation.  She
accused him of harassment and terrorism, all the while stating that the Bish-
op of Pittsburgh at the time and the Allegheny County DA at the time were
accomplices to such criminal conduct.

It has now been proven to be a lie that a young Frank Labiaux ... eldest son
of a Diane Thompson whose timeline identifies her as a teenage pregnancy
queen .... vandalized a church out of sheer frustration for having been mo-
lested.  Being that this Frank Labiaux is a proven liar, one can plausibly
conclude that he also lied about being molested.

Whatever be the case, Frank Labiaux made his debut instantly destroying his
credibility.  This will especially be the case in the eyes of an entire jury who is
given the time to assess a case that now qualifies as actionable libel.  Then comes
the Eggshell Skull Rule, where Anthony Cipolla was forced to endure the stress
heaped upon him by libel and defamation.

As I stated perhaps twenty times previously ... and which never sunk into Randy
Engel's mind, Donald Wuerl used the Cipolla Case to finally get out of the spot-
light placed on him by Washington County DA John C Pettit.  This case also
made the Edward Huff indictment largely unknown by the Pittsburgh people,
even though it did make the mainstream media newspaper, at the time.

For those unaware, Diane Thompson and Randy Engel made elaborate and
damning accusations against Anthony Cipolla, former DA Bob Colville, and
the late Bishop Vincent Leonard, concerning the assertion that Cipolla mo-
lested her son, Tucker, in 1978.  The added assertion, never prefixed with
the lawsuit-prevention word, ALLEGED, was that massive and violent re-
taliation occurred after Thompson "filed charges."  No civilian has the
power to "file charges."

You see, Engel asserted that an M.N. Nehouser, Badge #46, and an R. Fogle,
Badge #37 arrested Cipolla for molestation, filled out an Incidence Report,
and hung by Diane Thompson's side, telling her to not "drop charges, de-
spite all of the harassment she was going to get.   The narration all turned
out to be a fraudulent misrepresentation, except for the officer's badge
numbers.

In fact, in 1995, Thompson narrated a harrowing tale to a Pittsburgh Post
Gazette writer on how disappointed the two detectives looked when she
"dropped charges," with tears in her eyes, in the DA's office, signing a
paper that she couldn't read, due to the tears in the eyes.  That story
... and the story of her youngest son vandalizing a church out of the
frustration of having been molested ... have all now been proven to
be libel.  Provable lies.  Orchestrated falsehoods conjured by one of
the my incompetent liars you can encounter.

Mark Ninehouser was one of the two police officers who responded to Di-
ane Thompson's call in 1978, concerning her claim that her son, Tucker,
was molested by the man formerly known as Anthony Cipolla.

In her three-part article, Randy Engel referred to him as M.N. Nehouser.
None the less, he remembers the case and said the following:

All that he did was take a report from Thompson, and then filled
out a form by means of hand-printing it, and NOT handwriting it
with cursive hand writing.  He said that he simply handed the re-
port to the detectives, and that was it.  Nothing more was done
by him.  Thus:::::

1} He did NOT arrest Cipolla.  2} He was not called back to Diane
Thompson's home, to respond to a call that she made, reporting that
Cipolla was at her kitchen door.  3}  Plus, Mark was not called to
the scene of any face-slapping of nine year old Tucker by a 70 year
old man, and therefore, that account also turned-out to be a lie told
by Diane Thompson. 4} Mark was also NOT called to respond to
Diane Thompson's home, on account of any rock throwing incident
which broke one of her windows,

That which happened was NOT the way described by Randy Engel or by
the media in their 1990s reports about Cipolla.

1}  He categorically stated that he NEVER put any Catholic priest in hand
cuffs in 1978, including Anthony Cipolla.  Neither he nor his partner Robert
W. Fogle arrested Cipolla.

1b}  Ninehouser was NOT a detective.  He said that he took the report of
Diane Thompson's accusations and handed it to the detectives.

1c}  At this point, the following must absolutely be remembered:

Randy Engel wrote that Diane Thompson started getting harassed by Cipolla
on July 30, 1978, upon which she called Ninehouser (misspelled as Nehouser
by Engel) and Officer Fogle.  Former Officer Ninehouser categorically stated
to me that, after he handed his hand-printed report to the detectives, he walked
away from the Diane Thompson case.  Thus, she did NOT call him, saying that
Cipolla was in the house.  He did NOT say to her, "Diane, they are going to try
to harass you into dropping charges.  So, be strong and stand your ground." Etc.

And and and he most certainly did NOT go to her home after "she was forced to
drop charges" and give her a copy of the Incidence Report which apparently was
a counterfeited one filled out by a non-police officer under the guise that it was
done by a police officer.  He did not walk up to her and say, "You're going to
need this one day."

2}  Keep in mind that I stated that the Incidence Report mentioned by Randy
Engel, part of which was photographed and put online, looked like a forgery.
For those unaware, the online photo which was purported to be the Incidence
Report of 1978 was handwritten with crowded handwriting and the letter "l"
always being looped widely.   The reason why that photograph was the photo
of a forgery ... of a fraud ... is very simple:

Honorably retired Mark Ninehouser said that he and his fellow
police officers were required to print (hand-print) all police re-
ports.  No cursive handwriting was permitted.  The fact that the
photo purported to be the actual Incidence Report of 1978 is
handwritten with cursive writing, and not hand-printed, proves
that the sheet of paper called "the one remaining piece of evi-
dence" by Randy Engel is a very counterfeited fraud.  No po-
lice officer of the 1970s would have filled-out the report in
that fashion.

3}  Randy Engel stated that Cipolla was arraigned "at City Court" in a
Pittsburgh Police Station.  This is a complete lie, because no arraign-
ment ever took place in a police station.  ALL arraignments took
place in one of two places:

1} At the Public Safety Building which was located at First and
Grant Street, at one time.

Cipolla was never arraigned, because he was NEVER arrested.  He was
accused in a private criminal complaint and served with a SUMMARY
NOTICE only signed by Diane Thompson.  She was to appear in city
court ... at the Public Safety Building ... and state due cause as to why
Cipolla should be arrested.  It was a hearing equal to a preliminary
hearing, but without the accuser having been first arrested.  It was
a hearing that would judge if Cipolla were to be arrested or not.

4}  There is NOT any mistaken identity of police officers in this case,
being that Mark Ninehouser remembers the case in outline form, and
being that Randy Engel did get his badge number and Robert Fogle's
number completely correct.  Mark's badge number actually was 46,
and Robert's actually was 37, as Engel stated.  BUT, they were NOT
detectives.

In addition, there was ... at the time ... a #9 Police Station in the Northside,
located on Federal Street.  So, that part was gotten correct by Engel.  But,
there were NEVER arraignments taking place at any police station.

In addition, Engel stated that the incidence report was signed M.N.
Nehouser.  So, I asked Mark what the N stood for.  He said that he
did NOT have a middle name.

Once again, for those who are incredibly prejudiced against Cipolla:

5}  Rest assured that there was NO CALL to the police that a 70 year old
man working at any kind of a store slapped Tucker in the face, for having
accused Anthony Cipolla of wrong-doing.

6} Rest assured that no one called the police and reported a rock smashing
through any window at the residence of Diane Thompson and her children. 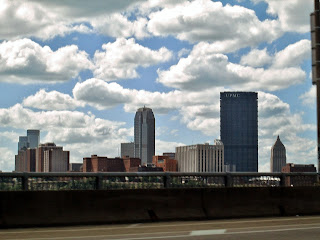 Take note that Mark was very articulate, talkative, and easy-going in his
conversation with me.  He did not stop to think of what he was going to
say.  He did not have time lapses of  momentary silence.  He simply spoke
spontaneously, hiding nothing.  He and I were literally shooting the breeze,
it was that easy-going of a conversation.

There is more to convey to you.  The bottom line is that two parts of the
three-part Randy Engel article that damns Anthony Cipolla and the late
Bishop Vincent Leonard to the Depths of Hell is complete libel.  If you
are a fan or friend of Randy, tell her that she better start talking to an
attorney.  There still is ample time before the statute of limitations ex-
pires.

I'll eventually have to notify Stephen Stone of Renew America that many
editor retractions and corrections need be made.  Moreover, if you pasted
that Engel article on your own website and you refuse to remove it once
notified, expect a summons to appear in court as a defendant, somewhere
down the road.

There WILL be other defendants, too.  I'll continue this at a later time.
For now, you have enough substantive information that it should easily
break the hypnotic trance that Engel has on the weak-minded & gullible.
She is NOT a guardian of Truth, Justice, and the American Way.  She's
a gossipy and libelous hag who actually thinks that the historic red
Shoes of the Fisherman are homosexual shoes.

I give you your freedom from Randy Engel's influence and her pretense
of being the deliverer of truth and her hatred of the Shoes of the Fisher-
man.  Be free.

Till the next time,