Wuerl's Triple Cover-up & Zirwas: Pittsburghers were clueless about this piece of history.

I literally could not find anyone in Pittsburgh who knew about it.  This is
how intense the Wuerl Propaganda Machine worked;in covering up some-
thing already uncovered by newspapers from New Hampshire to St. Peters-
burg Florida to Texas to California.

Keep in mind that the Year 2002 was the year when the sex abuse scandal
went international.  It was also the year when Cardinal Wuerl stole the spot-
light from the deeply suffering sex abuse casualties and had certain media
people toot his horn, by claiming accomplishments that never transpired.

No one in the media mentioned Wuerl's UNcooperativeness with law en-
forcement officials during his cover-up of Wolk, Zula, and Pucci.

In like fashion, no one in the media admitted that Wuerl reinstated into
ministry a fourth criminal priest, namely John Hoehl, a former Catholic
high school headmaster.

Plus, no one in the 2002 media revealed that U.S. Supreme Court briefs
were in Washington DC with Wuerl's name throughout them, as aggres-
sor, on account of Wuerl's cover-up of the intrusive homosexual  James
Torquato, a retaliator who literally almost got someone either seriously
injured or killed.  Literally.

The following internet post was a mind-blowing revelation when it was
originally posted, because, until that time, America was deceived into
thinking that Donald Wuerl was a heroic zero tolerance bishop with a
perfectly clean sex abuse handling record.  No one knew that Wuerl was
the SECOND American bishop to get caught covering-up criminal priests
.... and the first one accused of being uncooperative with police during a
criminal investigation.

All in all, this post is here to show how insufferably dishonest is and was
Wuerl's propaganda machine.  Through surrogates, he incessantly lied to
the public, deceiving people into thinking that he was a holy, caring man.

Then came the truth about Wuerl in 2018.  And the Vatican seemed not to
care about the damage, deprivation, and even jeopardization (the Torquato
Retaliations) that Wuerl caused throughout the preceding years.  The Vati-
can has become Wuerl's accessory as much as it was the accessory of the
international molester, Marcial Maciel Degollado.  Thus, this is an Evi-
dence Webpage.

Intro:  It's amazing how Vatican officials, Americans, Pennsylvanians, and
Pittsburgh residents in particular were clueless to the fact that Cardinal Wuerl
was caught in a triple cover-up which resulted in three of his Pittsburgh priests
being multiply indicted in more than one Pennsylvania county.  This is because
news of the criminal indictments and the reports of Wuerl being uncooperative
with law enforcement officials rang out in the newspapers from Lewiston Maine
to New Hampshire to NYC to Northwestern Ohio to Chicago to California ... and
from Cleveland to Saint Petersburg to San Antonio.  The reports were even in the
now-defunct Pittsburgh Press, as well as the Pgh Post Gazette. 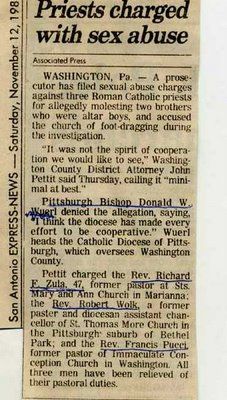